Light Up Cheltenham is back with a bang

Home » News » Light Up Cheltenham is back with a bang 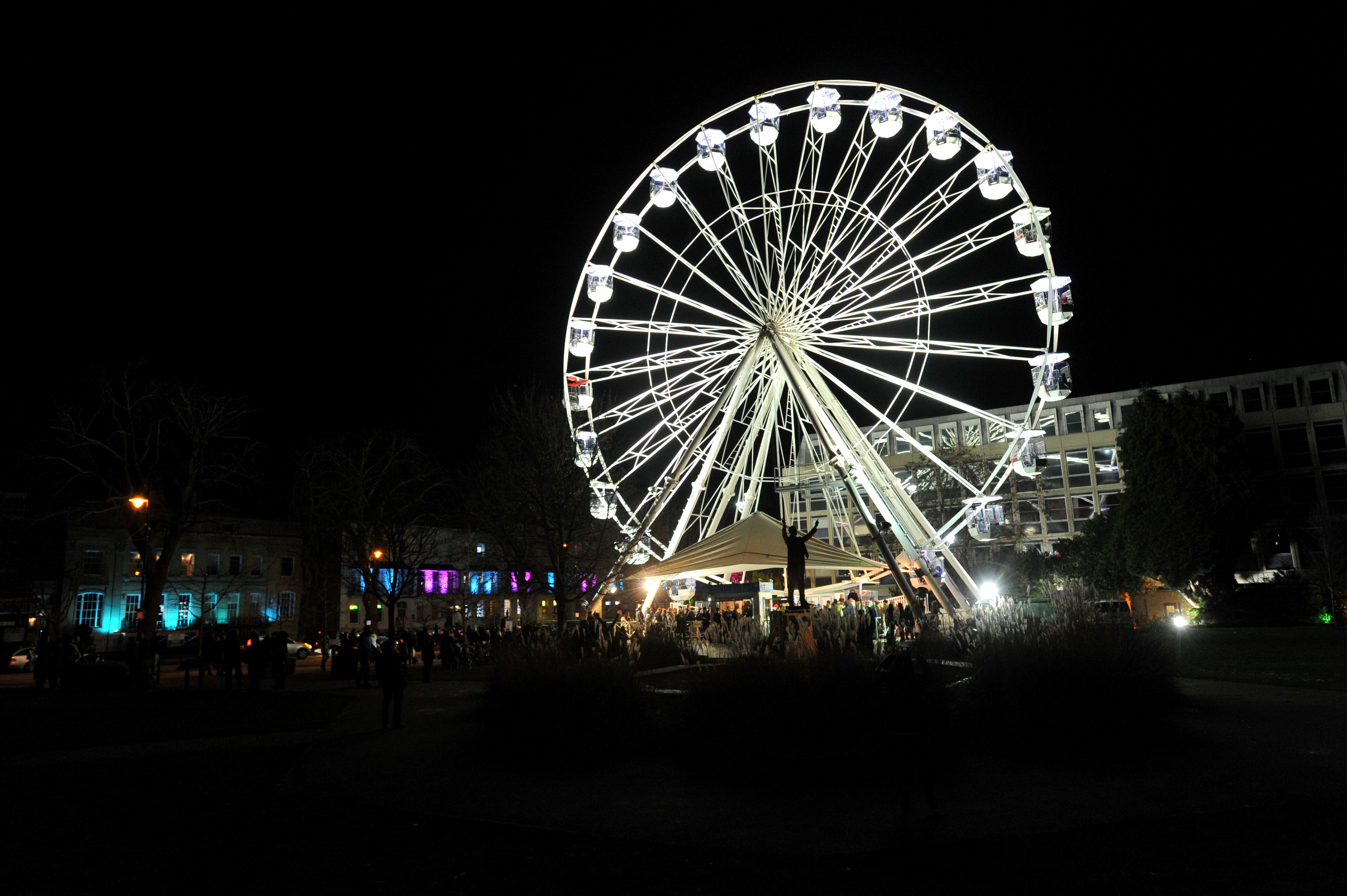 A giant observation wheel will be the focal point of an expanded Light Up Cheltenham in February.

It will be the first time a wheel of this kind, standing at more than 35-metres high, will have been brought to Cheltenham.

The wheel will feature throughout the three-week Light Up Cheltenham event which will run from February 2nd until February 24th.

It will stand in Imperial Gardens, where it will be surrounded by floodlit buildings including the Queens Hotel, the Town Hall, 131, and a terrace of ornate Regency buildings. The colour schemes will change over the three weeks and on February 14th, to celebrate Valentine’s Day, the whole town will turn red.

Close by, buildings like the Municipal Offices and majestic buildings on the Promenade will also be floodlit, as will Neptune’s Fountain.

The event will also spread across the town to areas and buildings including Boots corner, The Brewery Quarter and the United Services Club.

Spectacular street theatre drumming group Spark!, who were a massive hit at the first Light Up Cheltenham last year, will return to launch the event from 5pm on Saturday February 2nd. Further entertainment will be provided by the Photon Juggling Glow Show, who will perform on High Street on Saturday February 16th at the start of the half-term holiday.

BID Director Kevan Blackadder said: “Light Up Cheltenham was so popular when we ran it for a week last year that we wanted to expand to three weeks this year.

“We are delighted to be working with the de Koning Leisure Group who have taken the giant observation wheel to towns and cities across the country. This is a first for Cheltenham and will give people a unique view of the town and the illuminated buildings.”

A three revolution ride will cost just £5 for an adult, £4 for a child and a family ticket is £15.

Jan de Kroning, of de Kroning Leisure Group, said: “The wheel gives guests a previously unseen bird’s eye view of their surroundings. We’re very pleased to be bringing it to Cheltenham for the first time.”

The expanded Light Up Cheltenham sees an increase in the number of buildings illuminated from six to more than 20.

As well as many buildings having floodlights for the first time, other permanently-lit businesses will change their colour schemes to be part of Light Up Cheltenham. They include Martin and Co, The Bank House, Knight Frank and Cotswold Transport Planning.

Kevan added: “This event is all about adding some colour and fun to Cheltenham town centre in what can be one of the quietest months of the year in towns and cities across the country.

“We would love to see people come into town in the late-afternoon and early evening; taking pictures in front of the buildings, sharing them on social media and maybe even some proposals on Valentine’s Day.”

We will be working with events company SLX on lighting the buildings across the town.

When and where will the Observation wheel be in Cheltenham?

How much is it?

2 adults and 2 children or 1 adult and three children.

Can you pre-book tickets?

No. Tickets are available at the wheel on the day only.  We do not expect queuing time to be long though.

How long will I have to wait?

A ride takes 10 minutes and there are 24 pods, so it depends how busy the wheel is and whether there are a lot of people who need assistance getting on.

What time will be the wheel be operating?

The giant wheel will operate from 3pm every day with extended operating times at weekends and throughout the half-term holiday.

How many people can fit into a pod?

Five to a pod.

Are the pods covered?

Yes, there is roof to each pod.

Is the wheel disabled friendly?

A wheelchair can fit safely in a pod and there will be assistance available to allow a wheelchair user to be helped on board.

Spark! are a group of 5 light up drummers who will be performing on Saturday 2nd February.

What time does it start?

At 5pm at The Brewery Quarter outside SoHo / Cosy Club.

Where will they be performing?

From The Brewery they will go down the High Street to Boots and then down The Promenade.  They will stop on the Prom by Cav House for about 5 – 10 minutes then go down The Prom to Imperial Square where they will finish their performance at around 6pm.

There will be more entertainment on 16th February – keep an eye on our website and Facebook page.

What’s it all about?

February is a rather dull month so we’re lighting up the beautiful Regency buildings to cheer everyone up and show what a lovely town we have.

Which buildings are being lit up?

What time are they lit up?