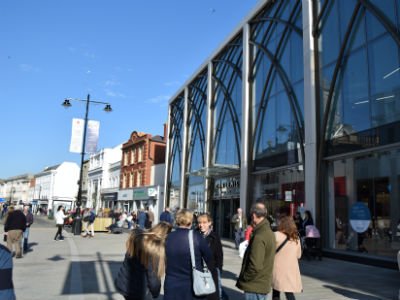 Cheltenham has today been ranked as the fifth healthiest UK high street by the Royal Society for Public Health (RSPH).

Known as a stylish Regency spa town enjoying a cultural renaissance, Cheltenham now features in the RSPH report Health on the High Street: Running on empty 2018, which ranks 70 of Britain’s major towns and cities by the impact of their high streets on the public’s health and wellbeing.

The research looked at the health impact of a range of high street outlets – extending the RSPH 2015 analysis to include vape shops, convenience stores, off-licences, cafes, and empty shops. Each business was scored on the basis of whether it encouraged healthy lifestyle choices, promoted social interaction, mental wellbeing and greater access to health services.

Its ranking of 70 high streets found those living in the top 10 healthy areas lived an average of two-and-a-half years longer than those with the 10 unhealthiest high streets.

Cllr Steve Jordan, leader at Cheltenham Borough Council said: “I’m delighted that Cheltenham has been recognised as the fifth healthiest UK high street. The report reflects the ever-changing face of Britain’s retail environment and how the high street plays an important role in the wellbeing of our community. Cheltenham clearly has a healthy and compelling offer and we are collectively working hard to make sure it continues.”

Kevan Blackadder, director of Cheltenham Business Improvement District (BID), said: “It’s another positive message about the positive position of Cheltenham town centre generally. Not only have we had some landmark stores open recently, but this index highlights that it’s a great place to both live and do business”.