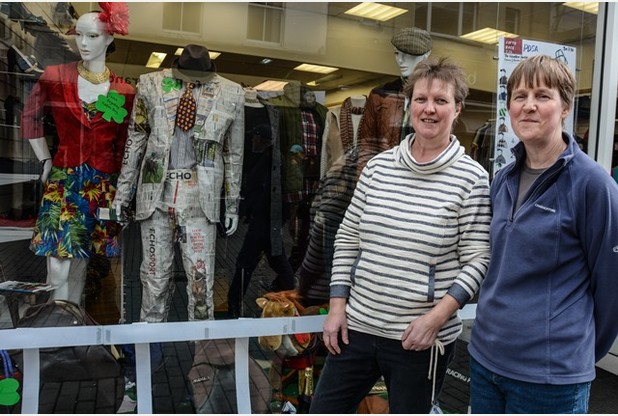 Charity shops play a vital role in keeping our High Streets alive and are, for many charities, a major source of income. For some volunteers, they can be an essential connection with other people.  The PDSA shop on High Street is no exception.

Shop Manager, Dolly Neal, has managed charity shops for more than 15 years.  She knows how competitive the market is.  She says: ”Charity shops are really no different to any other retailer, we have to understand the market and work to attract people to our store.”

Dolly has one assistant manager and 27 volunteers, one of whom makes a 55-mile round trip, just so she can work in the Cheltenham shop.  Julie, another volunteer at the shop, said: ”I could work in one of the charity shops where I live but I enjoy coming to Cheltenham.  There’s a lovely atmosphere.”

The BID has put Christmas lights on the Strand end of High Street and would not have been able to do this without the support of Dolly and the PDSA.  When we asked for their help in providing a power source for the ceiling of lights, Dolly was delighted and only too happy to help if it meant being lit up for Christmas.

Dolly and her team of volunteers are community minded and make a point of supporting the businesses on their doorstep. They took part in the Charity DJ Clash early in the year, which the BID supported.

PDSA Cheltenham take every opportunity to make the most of local and national events and holidays.  Every year in March their window display has a decidedly ‘horsey’ theme to celebrate The Festival™.

As part of the national PDSA centenary cycle challenge, they held a fun-filled open day with loads of  activities and refreshments for shoppers on High Stree who had the opportunity to join PDSA Director of Human & Corporate Resources, Karen Hailes, by cycling a mile alongside her on an exercise bike.

As BID Business of the Month, PDSA Cheltenham will have the opportunity to speak at the next Cheltenham Business Forum’s BIG Breakfast.